A short quiet street between St. Louis Cathedral and Cabildo , a contrast to the hustle and bustle around Jackson Square.

Some claimed it was a haven for pirates in days past, while other claimed that slaves were sold at the adjacent St. Anthony’s Garden on Royal Street.Located in Pirate Alley in the Faulkner House, named for William Faulkner who wrote his first novel while residing there.

Handcrafted in New Orleans . They were use for roofing materials after the disastrous fire which occurred on

Good Friday, March 21 1788. Each one is individually hand shape. This one of the old Building in the View Carre area. 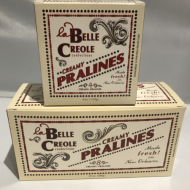 The Haunted History of New Orleans
$15.95